"Not That There's Anything Wrong with That" 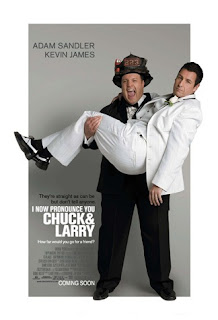 Got to see "I Now Pronounce You Chuck and Larry" tonight. I really liked it, although I'm STILL undecided whether or not I think Jessica Biel is hot. I find her a bit of a "two face," to use a Seinfeld reference.

There were a lot of familiar faces Sandler has used in his past movies. In addition there were some really random cameos (Dan Patrick and Dave Matthews)! A couple quick facts I found out:

-The book that Chuck (Adam Sandler) reads the kids as a bedtime story is "The Puppy Who Lost His Way", the same book Billy's 1st Grade teacher reads at story time in Billy Madison (1995).

-Steve Buscemi was actually a New York City Firefighter before he became an actor.